Last Saturday we took Walt to his first MyGym class. Like many similar places (Little Gym, Gymboree, etc), MyGym is a little tyke friendly place for the kiddos to run, crawl, pull, tumble, giggle, and so on.  We weren’t quite sure what Walt would think about it. He’s a pretty social guy, but he also prefers to analyze a situation before committing to it. Like observant and compassionate parents, we threw him right into a class with 12 other kiddos. We were also worried b/c the class technically overlaps when he normally starts his morning nap. It was worth the risk…

Walt had an absolute blast. There were giant balls to play with:

The pic above is deceiving. Walt doesn’t technically crawl on all-fours. He still army crawls (though does so very quickly).

We also got to dance around a circle (seriously, what’s with the trucker look with my hat!? It was early, people).

Probably the most exciting thing (for mom and dad) was when Walt got to practice a hand stand (??? he can’t even walk on his feet… how would he stand on his hands??). Welp, he didn’t 🙂 But he sure gave it the ol’ college try: 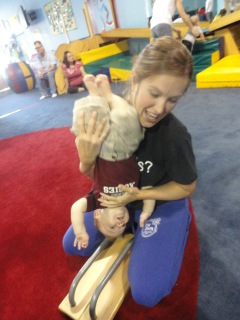 He loved being upside down… not too sure what to do with his hands.

We had such a fun time. Walt loved the slide and when he got a turn on the swing.  He stayed awake and alert for the whole thing, with not a single fuss.  Chris got him home and the little monkey crashed out for 2.5 hours!  We can’t wait to see what he gets to try next week.