Several weeks ago, after several drinks and a little trash talk, our neighbors decided we needed to do a Chopped competition. Since Chris and I weren’t in on the original conversation, we were immediately nominated as judges (read: taste testers).  With little debate, it was decided this was a boys versus girls competition.

For those of you unfamiliar, here’s how it works. Each team is presented a basket of ingredients. The ingredients are typically a protein, starch, veggie, and fruit. Each team’s basket is identical. The teams have to create an entree using all ingredients provided, but have creative liberty with whatever is in the pantry/refrigerator. 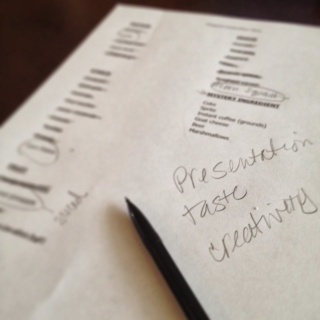 Chris and I took our role as judges very seriously.  We had a long list of ingredients that we narrowed down to 5 (the major categories and a mystery ingredient):

After the baskets were opened, we put an hour on the clock and they were off…
The last five minutes were amazing. Chris and I sat back with our glasses of wine and watched them sweat. There was concern over “doneness” of the girls’ meat and the boys were hung up on presentation and details. We literally counted down the last seconds and everyone’s hands went up in the air.

With our judges score cards handy, we were ready to get to tasting.