It’s time for another monthly update. I have to admit that the pending holidays and my being back in the work groove is making these pop up faster and faster.
So, what has this little stinker man been up to in the past month? A lot!!  I don’t have height/weight stats because he won’t see the doc until six months, but he’s still a big ol’ boy. Here are some things Oscar has been impressing us with this month: 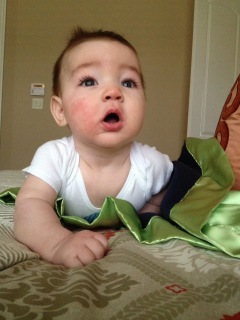 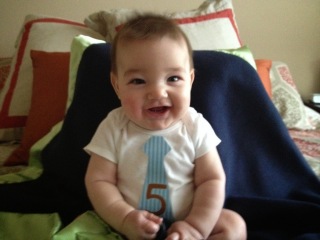 I don’t really know how Walt and Oscar are majorly different now, but they definitely have done many things differently. Oscar is very happy and laughs, but I think Walt laughed more frequently. Also, Walt rarely had middle of the night wake ups (I know, I’m a total sucker), but Oscar rarely has a night where he doesn’t wake up at all. Most night’s it’s nothing more than a wake up requiring a paci, but there are definitely nights that require several trips upstairs, lots of paci inserts, patting, rocking, and even dragging the baby into bed with us. #badhabits 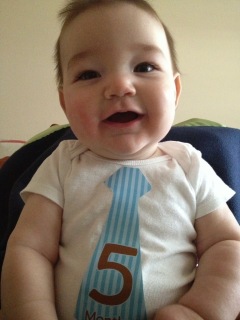 I sure love the personality on this kid. Majorly laid back, but lots of life. I can’t wait to see it continue to develop.