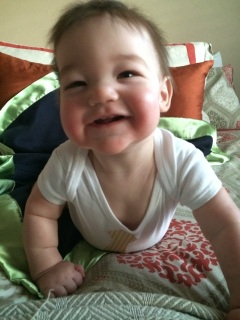 These months are coming fast and furious. We’re already in the second half of Oscars 1st year. It’s insane!

Our little Stinks bug is an active one! I could have told you that while I was still pregnant with him. That kid came out kicking, so I knew I’d have my hands full.

Here are the updates:

Eating: Oscar is taking to solid foods like a champ. We have tried pretty much every traditional fruit and vegetable and he gives everything a shot. He has also decreased how much milk he drinks completely on his own. We now eat every four hours (instead of three) and many times it’s only 6 oz (versus 8). We’re on to solid chunks of food now! 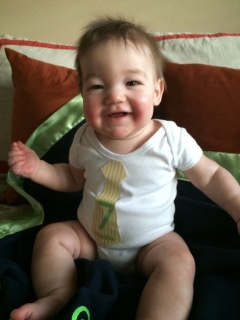 Sleeping: It’s safe to say this is not Oscar’s strong suit 🙂 In his defense, he’s had a rough go with illness pretty much since Thanksgiving (Croup, ear infections, RSV, etc). So, I’m cutting the guy a break. He also has had a tough time with teething (see next section). So there are still many a nights that we have to get up and soothe him, but we’ve started calling it snuggle time and really I do appreciate these little moments. All in all, he’s still sleeping about 13 hours at night, so that’s hard to complain about. He’s also pretty much only taking two naps a day.

Teeth: We have two more! Two GIANT top teeth with an adorable little gap between them. I love them! 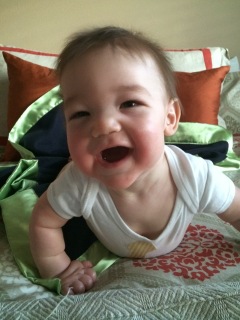 Moving: Um, this guy wants to MOVE. He’s got army crawling down and is now doing things that lend themselves to real crawling. Walt never really built up to these milestones. He would observe forever and then just all of a sudden crawl, or pull up, or walk. Oscar wants to get his feet wet, no doubt. Check this out: