If it’s not clear, I love pop music. I also love Vegas. Two years ago, Britney Spears announced a permanent show at Planet Hollywood in Las Vegas. At the time, Oscar was so tiny (term used loosely), that it never seemed like a possibility. Fast forward two years later and all the stars aligned. I’m so lucky to have a hubby who not only lets me take these quick girls’ trips, but encourages them. Breaking news: he’s the best ever!

We started bright and early on Saturday (landed in Vegas at 8:00 a.m.!).  Just in time to powder our noses and head to Lavo (Palazzo) for brunch on the patio overlooking the Strip. Despite the highs still teetering near 100 degrees, the air was so dry, that it was actually cool in the shade. It was perfect. 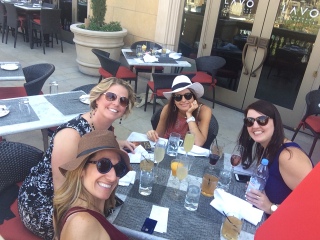 After a bottom-less mimosa bar, we walked back to Planet Hollywood and shopped for our Britney merch.

We needed a quick disco nap (3 a.m. wake up call needed to be rectified, stat!). Then spent the next two hours getting ready for the show #thingsyoucandowithoutkids.

We ate dinner really early in order to ensure we got back to the Axis Arena at Planet Hollywood in plenty of time. We had enough time to walk alllllll the way down to our amazing seats. We were the 2nd row of seats, right behind the VIP tables and GA. We could see Brit’s eyebrows!

The show was really incredible. I know Brit gets a lot of grief, especially after her meltdown.  But, here’s the deal. Does she sing live? Nope. Did she perform her socks off? Yup! Did we know and singalong to every song? You better believe it! She’s such a staple idol of my generation, I felt like it was totally worth it.  Among all four of us, we have hundreds of pics of the actual show. To avoid boring you, I’ve chosen just a taste.

After the show, we were pretty pooped, but decided to go somewhere for a drink to discuss the show and wind down. I’m not exactly sure what happened, but free bottle service and 3 hours of dancing later – we finally went  to bed.

After sleeping in, we grabbed some breakfast and enjoyed a day by the pool in our cabana. Oh, did I mention our cabana was right next to the Chippendale’s cabana? No biggie.

We spent another two hours getting ready for dinner and whatever the night would bring us.

The night was tame compared the previous night. We stayed at the STK bar all night, which led to a quick siting of Drake and a few various other c-listers.

The trip wasn’t the entire crew, which always leaves us wanting to go back and bring more people. Two days after we got home, Brit announced she extended her contract for TWO more years — so, let’s start planning!