I think this all started years ago when we first took Walt to the dentist. He’s totally fascinated with losing his teeth! He goes to a Montessori school where they put 3-, 4-, and 5-year olds in one class together (it’s so the little ones learn from the big ones and the big ones help to lead/coach the littles). So, he’s seen or heard about kids losing teeth for quite some time.

About two weeks ago, Walt tried to convince me that his tooth was loose. I brushed it off thinking it was just him willing it to happen. Finally, I took a look and a wiggle, and sure enough it was moving. Not crazy wiggly, but definitely loose. As each day went by, it got looser and looser.  He was so proud of this tooth! He never seemed scared or worried that it was going to come out.

Finally, today when I picked him up from school, he came bounding towards me, said, “Mom, look at my tooth,” and smiled BIG. There was the little gap on the bottom – cute as can be.  Not to mention I could see the top of the new tooth coming in, so this definitely was the real deal. 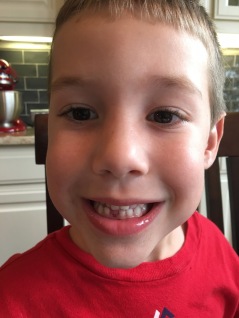 We hadn’t talked much about the tooth fairy, so there was a bit of explaining. I made sure he knew that she was taking his tooth (I didn’t want a meltdown over that!) and she would give him something in return. 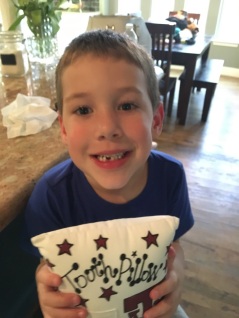 He proudly tucked his tooth in the tooth pillow and waited until morning.  The tooth fairy left him four whole quarters (tooth fairy note: I refused to be sucked into the $20/tooth cycle or even the toy for a tooth. We have 19 more teeth to go. That’s a bar that will keep going up and I don’t want to be scrambling at midnight trying to find a new Lego toy or searching for a $20 bill). We have some other fun tooth fairy tricks up our sleeve and didn’t want to use them all on the first tooth. You want to know what else the tooth fairy did? She threw away the tooth.  Yup. We are horrible people. The audacity not to save my children’s teeth!! I think it’s great for other tooth fairies who bring grand gifts and memorialize the teeth better than ours did, but for us, we have enough stuff to keep up with. 20+ baby teeth is not going to be one of them 🙂

And just like that, the tooth next to this one is already starting to wiggle. He’ll have a big hole in his mouth just in time for Kindergarten!