How in the world did Walt get to be two months old so stinkin’ fast??  I have several dear friends who are pregnant and it feels like I was just there with them.  Then at times it feels like I was pregnant years ago (and frankly, I am happy to not be in the last leg of pregnancy anymore… ick).

BUT, this is not about me, this is about the monster man that has invaded our home.  Here is a pic of the little dude on this, his b-day morning: 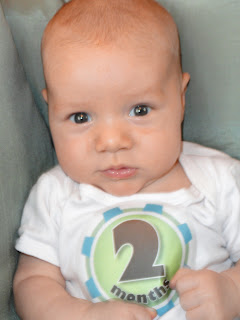 Walt is getting more of a personality.  He loves the insane songs that Chris and I sing to him. Chris prefers to take popular songs (say, Enter Sandman by Metallica) and turn them into lullabies. Yes, a bit creepy, but also real sweet. 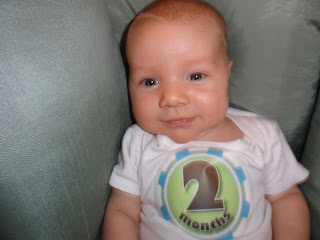 Walt smiles a bunch more now! Normally right after he’s fed, b/c this kid is an EATER. We have our 2-month appt tomorrow with Dr. G and I’m way curious to see how big he is.  At one month he was super tall and fat.  My grandma would be proud 🙂 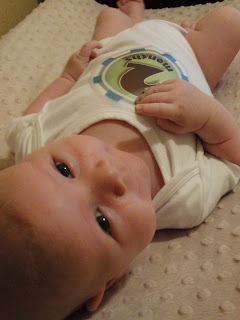 One not-so-fun discovery is Walt has reflux. This basically means he spits up… a lot.  It’s smelly and icky, but doesn’t really bother Walt.  It did until we got him on Zantac (Really? This is what Chris and I take after we eat too much Mexican food). 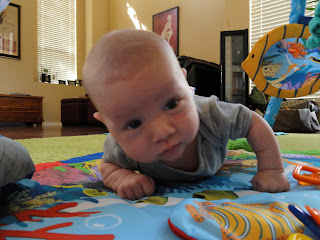 Miraculously, he doesn’t loathe tummy time as much as he used to.  Really the only thing holding him back is the spitting up issue (I often find him in pools of spit up… or small lakes).  He has a hilarious fascination with an octopus that goes with this mat. It’s hysterical.

As Walt gets older, we can see his features developing. I still think there is no question who’s his daddy 🙂  I do have some baby pics of Chris and I to share. I’ll do that next post and you can decide for yourself. 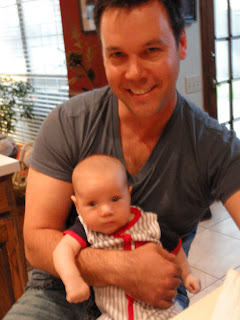 I wore Walt out with the photo shoot this morning. 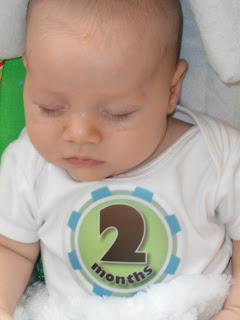