Here we are at another monthly update!  This is a fun one, because Walt saw the doctor at four months old, so I have all sorts of fun stats.

I realize the second pic is kinda blurry, but I had to showcase how happy Walt is in his Bumbo. He loves to be big. 🙂  So, at the Dr. G’s this week we found out the following about Walt’s growth:

He is a very long and lean boy. Just like dad. Pretty much every feature about this little guy is like his dad. I will continue to hold on to the fact that he has my hands and feet. Very long and skinny feet and giant hands. Both things better suited for boys than girls, so I’m glad he got them. 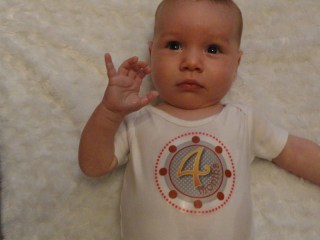 Walt loooooves to touch things now. He can hold on to toys, but he hasn’t quite grasped (pun intended) all the mechanics that go into grabbing and holding.  Definitely once he gets something, the first place it goes is straight to his mouth.  He also loves feeling things. One of his favorite things is to rub and touch on Dad’s face 🙂

Walt still spits up and drools like a champ, but it doesn’t really bother him in the slightest. We go through 5-7 burp clothes a day (at least).  He is constantly wearing a bib. Matter of fact, in the pic above, you can see remnants of some spit up on his left side. 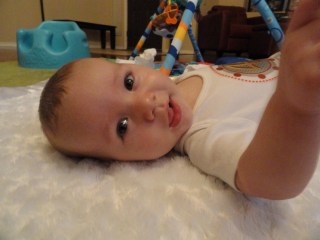 Walt is capable of rolling, but he doesn’t understand how to really execute it.  We’ve also recently stripped him of his swaddle (note to parents and future parents: this has been torture b/c Walt has slept through the night since 8 weeks, so to revert back to getting up every two hours has been SUPER painful!).  Luckily, I think I see a light at the end of the tunnel. He had some good stretches last night.

With some assistance and/or propping, Walt can sit for a little bit. By a little bit, I mean like 2 minutes.  His round bottom either slides forward or he tips over to either side.  He also LOVES to stand assisted. 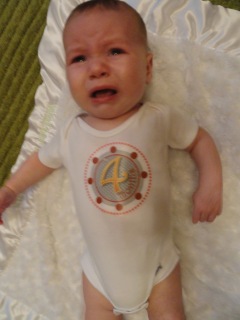 Here is the long boy at the end of the photo shoot. 🙂 He is such a trooper and lets me fumble and mess with him all the time.  Walt has brought so much joy and laughter to Chris and I (we didn’t even think we needed more!) and we are so grateful to have such a healthy and happy boy.  Every single day, week, and month just gets better and better 🙂 Can’t wait for the future!