Little miss is four months old! This last month was really fun (as things typically are between 3-8 months…juuuuust in time to go back to work). Lucky for us (me), I’ve had the luxury of having Vivian home with me during my first month back at work. We had so many wonderful helpers for her including my mom; my mother in law; an incredibly generous neighbor, Kari; our very first Bruns sitter, Maddie;  and my niece, Abby. Vivian was loved on a LOT this past month!
Our big girl has settled in to a very nice routine. It sure makes it easy to plan the day, but it does not make it easy to leave the house. Viv is still eating every three hours during the day. She takes 3 solid naps around 9a, 12p, and 3p.  Most of the time her naps are an hour, but she definitely does whatever she wants. She is napping almost always in her bassinet (which is still in our closet), but has tried out her crib a few times and did perfectly. In a pinch, we let her nap while we are out an about (pretty much every weekend day), but those naps are short then make for a crabby baby later in the afternoon.

We go to the doctor on Tuesday for an official check up, but look at her little round face! I think she’s packing on the pounds. She’s still in 3 month clothes, but I think she’s super close to transitioning to 6 month. Something else she’s super close to doing is rolling over. She arches her head all the way back around. She just needs to throw an arm over and she’s there.  This girl is in no hurry to break any records like the boys were. I’m totally ok with that! 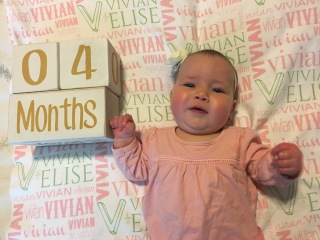 Other things Vivian is into are her hands, grabbing things and attempting a full on assault with her mouth, giggling for her brothers, talking and cooing, taking walks, sucking her thumb.  Things Viv could do without are long car rides, being left alone, reaching the end of her bottle.

I’ll do another update after we see the doctor, but Vivian seems to be growing just perfectly!  One last thing: her eyes are still very blue. Will they change??